The Meaning of the Audi Logo

Competition is fierce between car brands. Therefore, manufacturers must have a strong brand image to stand out. Whether they are Asian, American or European, often, there is a story to behind these companies’ logos. Today, we are going to analyze the 4 rings of the famous Audi logo.

As you may know, Audi is a German car manufacturer known for its luxury vehicles. August Horch founded the company in 1909; however, this was not Mr. Horch's first automobile company.  He had already had a company bearing his name, but following disputes with the board of directors, he left A. Horch and Cie Motorwagen Werke to start Audi. Since August Horch could no longer use his last name for his new business, he sought out a new idea. The founder eventually opted for the Latin translation of his last name, which means hearing in German. That's how the Audi name was founded. In the years that followed, Audi won several long-distance races in Europe, giving it a great reputation.

The Merger of 4 German Companies

When the Great Depression badly hurt the German car manufacturing industry four different companies, including Horch and Audi, joined forces to create a consortium that would be called Auto Union AG. It was the union of the four companies in 1932 and its four logos that would be the basis for creating the logo we know today. Let's take a look at these companies. 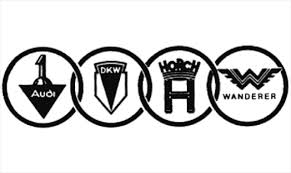 The Audi logo before the consortium was made up of the company's name using a work font in a black inverted triangle. On the top was the number 1 on a semi-circle which resembled a gear lever. August Horch probably wanted to tell his old company that he was still relevant.

DKW or Dampft-Kraft-Wagen was a company specializing in the construction of automobiles and motorcycles. Their logo was the outline of a shield with the company's initials in a green triangle serif-free font inside.

Horch, August Horch's first company, had a combined logo. In black and white, was a multidimensional H and the name of the company in a very stylized and irregular serif-free font located above it. It gave an almost playful look to the logo. In addition, the text was positioned on several arching lines, adding a luxurious look to the entire logo.

When you look quickly at the Wanderer logo, you may think it is the Wonder Woman symbol. In fact, the two logos are composed of several superimposed Ws creating counter-forms. However, the automakers’ logo is differentiated by its winged ends.

In short, it was difficult to find a way to keep these four very different logos within the new brand image. The companies, therefore, relied on their new unity as inspiration. This is when the four rings appeared and became the logo we know today, with the exception of the name AUTO UNION in the center.

The Audi logo hasn't changed much since the Auto Union label was removed. For the company's 100th anniversary in 2009, however, the rings were reworked slightly so that they were a little closer together and had more detail. The final look also included more metallic coloring to give the impression that the rings are made of metal. In addition, the very stylized Audi word was changed to a simpler and classic font. The logo is often found in silver to represent luxury and technological discoveries. The company's motto is also "Advance through technology."

Did you also know that the Olympics sued Audi for using the rings as their logo in 1995? Despite several rumors, the lawsuit was unsuccessful, and the German carmaker was able to continue using their world-recognized logo.

How to be inspired by Audi for Your Brand

First of all, as August Horch did, don't hesitate to try your business name ideas in different languages to find the name that will perfectly represent you. As mentioned above, since he could no longer use his own name, at least in German, he found a way around the problem by opting to use his name in Latin. Then, why not take advantage of an important event within your company to redesign your logo? Your brand image must always represent your values, as well as the products and services you offer. Don't bet on a logo that is accessible to everyone if you make luxury goods, for example. Or, if you're merging with another company like Audi did, why not take the opportunity to start fresh? In short, as we have seen in this case, unity is strength!

In conclusion, we must be bold to ensure the success of a business. Audi is a company that has managed to overcome challenges brilliantly and now its four rings are recognized around the world. You may think the current logo is much better than the original logo. Also, do you know the meaning shapes give? Shapes, like colors, send different messages. Circles, for example, are used precisely to represent unity and infinity since there is no beginning or end.