You probably want to create a logo that will leave both a lasting impression and message, especially if you have just started your company. A logo can certainly help you be respected as a business, as well as give you authority and notoriety. What can you do then to do it right? Think of all the establishments that inspire confidence. You will notice that several major universities or luxury companies have a shield or coat of arms as a logo. Why not do the same?

What Are Coats of Arms Anyway?

You probably know what a shield looks like but do you know exactly what a coat of arms is? Coat of Arms is a collection of elements, currency, and symbolic pieces that represent a person, a family, a company, or even a country. They initially, among other things, were used to recognize and differentiate soldiers in battles, and over time to represent great ruling families. The more important someone was, the more complex the coat of arms was as it had to contain all the family members and property of that person. Have you ever taken a look at the coat of arms for your country? It probably contains many details reminiscent the official currency, wildlife and/or plants.

Why Should You Have a Shield Logo or Coat of Arms?

As mentioned above, in addition to countries, there are several large institutions that proudly display their shield logo or their coat of arms. These are often companies that are recognized for their excellence, such as elite universities like Harvard and Georgetown, but also for their long existence. Your company does not have to be three hundred years old to use a coat of arms or shield as its logo, on the contrary. If you want to project a serious image, conservative, traditional or confident, the shield logo or coat of arms is perhaps what you need. This type of logo also tends to inspire confidence more easily, because it contains a noble element.

What Can your Shield Logo or Coat of Arms Contain?

There have been many studies on the rules of the coat of arms. In the United Kingdom, the College of Weapons deals with official questions concerning coat of arms. However, you do not have to follow them because they are no longer relevant. For example, purple and green were colors rarely found on coats of arms because they used to be very hard to get. The important thing is to keep the historical spirit when creating your logo as you want to have the same impact as the logos of prestigious companies.

What inspires you exactly? What elements should you put on your shield logo or coat of arms? First, have your values and business sector in mind when creating your logo. What sector do you work in? What represents the place or region where you live? For example, is there a flower, tree or animal that is prominent? What elements does your business represent? Once you have an idea of what you want to incorporate, why not take a look at historical examples? You will see there are hundreds!

Leaving out prestigious universities and coats of arms of cities and countries, there are several companies that have opted for this type of logo. Here are three examples:

United Parcel Service, aka UPS, is a well-known delivery company around the world. The company was founded in 1907 and since then has had a shield as a logo. The creator of the logo wanted this symbol to reassure that the parcels were safe with UPS. Since then, the shield has always been a part of the UPS logo, even after several redesigns. Their logo certainly knows how to inspire confidence!

You will agree that the logo of the German Porsche company is more complex than that of UPS. Created in the 1950s, it not only has deer antlers but the coat of arms of the city of Stuttgart - a horse, and of Württemberg - red and black lines. Although the logo is not yet 100 years old, it is easy to think otherwise because of its representation of historical territorial roots.

Now let's talk about an older logo, that of the Hudson's Bay Company. The creation of the logo dates back to the 17th century when they were trading mostly fur. As mentioned above, you can be inspired from the wildlife around you to create a logo with coats of arms. That is exactly what this Canadian company did by incorporating two moose, a beaver and a fox. All of which are found in Canada and are known for their fur. 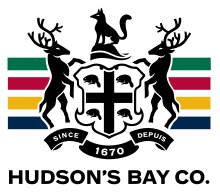 In conclusion, after reading this article you may search for the coat of arms of your ancestors. If there is not one, why not create one? Kate Middleton and Meghan Markle designed theirs before entering into the English Royal family, so why don’t you? It will be a bit like being a noble family in the Game of Thrones. Your shield logo or coat of arms can easily give you credibility even if your company has only been around for a few months.

Get the tools you need to improve your online presence. Design your own logo today with our free online logo maker. Try our free logo generator to make your own custom logo.
Create my logo
© 2021 FreeLogoDesign.org All Rights Reserved Terms of use | Privacy Policy